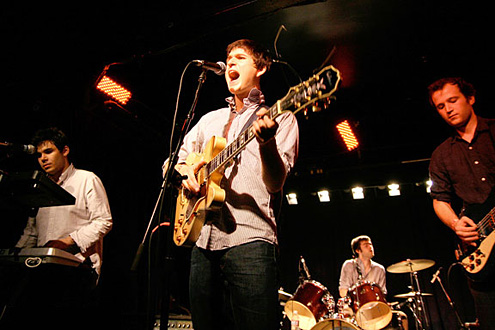 It’s been said that imitation is the ultimate form of flattery, and Vampire Weekend pays tribute to several with DJ-like dexterity and flawless execution which is never forced. The end result feels glaringly new, even if it uses noticeable ingredients.

I can’t comment on the immense level of buzz this NYC-based quartet enjoyed since forming just two years ago in a Columbia dorm-room, because I wasn’t exposed to it (read: I don’t follow music, I just listen to it). In any case, strip away the hype, and you’re left with a delightful collection of 11 bouncy songs from people who obviously know what they are doing, even if they generously recycle ideas.

Drums sizzle, and often sound more like percussion than actual drums. Guitar is used regularly, though sparingly. Basslines are driving, and often the center of attention during first verses. The organ, synth, and string work is unthinkably melodic. And the vocals are crooning, soulful, and refreshing, even if they sound brazenly similar to the aforementioned Simon.

Vampire Weekend, already dubbed the band of the year by Spin Magazine, is more than deserving of the hype. These guys are the real deal, even if you think cardigans, boat shoes, and privileged Ivy-leaguers shouldn’t be allowed (and who can say that’s been done before?). Though far too early to tell how prolific they’ll end up being, these lads are brimming with promise, and I’m anxious for more.

In short, Vampire Weekend has a legitimate shot at being album of the decade. Prove me wrong.

They are playing in SLC next Monday.

I am going to have to disagree with you on this one.

First of all, don’t you dare classify this as Rock N’ Roll. This album is pop in its purest form and has little to do with the sacredness that is RnR.

Second, album of the decade? Come on you have got to be kidding me. I can think of plenty of other albums this decade 10 times as strong as this one. Stadium Arcadium and Origin of Symmetry to name a few.

In my humble opinion Vampire Weekend is decent, worth a listen or three but will not even crack my top 100 bands list.

Be careful how you classify Rock N’ Roll, mate.

From Wikipedia: Rock and roll is a form of music that evolved in the United States in the late 1940s and early 1950s, and quickly spread to the rest of the world… The beat is essentially a boogie woogie blues rhythm with an accentuated backbeat, the latter almost always provided by a snare drum. It later spawned the various sub-genres of what is now called simply ‘rock music.’

Take that, music police! (Note: I think “pop” can be considered rock, I could be alone in this, however).

Cause if its on Wikipedia it must be true. I don’t understand why my college professors won’t let me use Wikipedia as a source for research papers. It seems to be a well of undeniable truth.

I once got into a huge argument about music with someone and learned an important lesson. Music is so much opinion based that you can never win the argument no matter how hard you try (even though I know I was right). If Blake wants to call this the album of the decade, go for it. If Tim wants to call the Swing band of the century, go for it. I for one think all music to be equal (except for country, sunday music, disney, speed metal, opera, American Idol junk, and anything else that I think is crap).

Mark,
Oh, your collegiate grief has left you dowdy in sweatshirts. Absolute horror!

The Swing was the greatest band ever. Duh everyone knows that. In fact, I think it’s on Wikipedia.