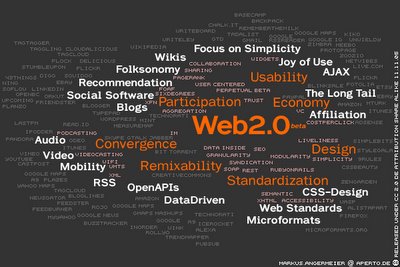 Though mostly a buzz word rather than entirely new web technology, Web 2.0 is a much more personable place to “surf.” Wikipedia writes: “The term ‘Web 2.0’ refers to what some people see as a second phase of development of the World Wide Web, including its architecture and its applications… Many recently developed concepts and technologies are seen as contributing to Web 2.0, including weblogs, linklogs, podcasts, RSS feeds and other forms of many to many publishing; social software, web APIs, web standards, online web services, Ajax, and others.”

It’s exciting to be a part of the continued development of the web. My team is currently working with a large majority of the above listed technologies, and I can already see the positive results it’s had on our clients sites, software, and systems.

In short, Web 2.0 is like hearing “You’ve got mail!” all over again for the first time. Bad analogy, but hopefully you get the gist.

Hm, yeah. I never really thought about it, but it IS neat, isn’t it? We’re part of the blogging revolution, Blake! Who knew I would be so into technology stuff?!?

What I find most interesting about Web 2.0 is that it’s really a return to Berners-Lee’s vision of Web 1.0.

Client created content – check (the first web browser was also a web editor. The idea was that you could browse any page and edit those that you had permission to, all from the browser app).

Anyway, I’m sure there are more comparisons that could be made. So, what’s really happening with Web 2.0 is that the Web is finally meeting its original potential.