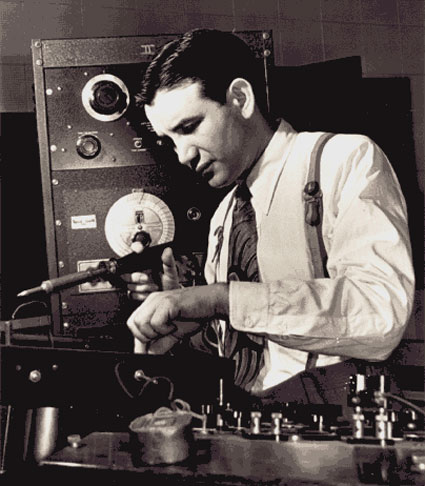 For those who don’t know me personally, I’m a big fan of electronic music. I can listen to the stuff for hours and perhaps even listen to it more than live compositions — the sound is just so tight, so crisp.

Raymond Scott, a sound engineer and musician born in 1908, was an early pioneer of electronic music. I understand he was one of the first artists to create songs using only computers.

Recorded sometime between 1953-’69, this is one of my favorite tracks of his. I shutter to think where we’d be musically without this man’s contributions. Good stuff.

Bless you, Blake. I had (loaned, and lost) the two disc CD set of his electronic stuff. The “organized mind” is a pretty bizarre piece in and of itself.

There’s a group called Simian Mobile Disco and their debut album has a track on it called “Scott”. It’s a great homage (and a great album).