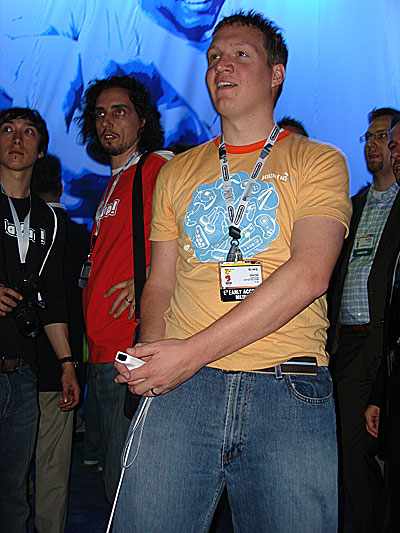 Here’s me playing Nintendo’s new Wii console (from the hip of course during a shooter). The controller works in 3D space and is one of the most impressive interface devices I’ve played with in a long time. Should be interesting to see how console gaming pans out over the next few years between Microsoft, Nintendo, and Sony.

Also of note, were the many VC’s I saw at the event. One in particular even interviewed me asking several questions about the games industry. Video games are big business, and this conference is proof of that.

My, what a hard, tan body you have!

ohhh! you must be having a lot of fun over there. I can’t wait for Wii 🙂

wii. sounds like “oui,” which is hello in French. Did they think about that one?

you lucky duck. i’ve always wanted to go to E3.

Nice comment Lindsey! FUNNY! See comment
left on above blog. Repeat! Is this why I spent money in the 80’s for you to be in the front lines of the NEW BIG BOY TOYS show? LOVE mom