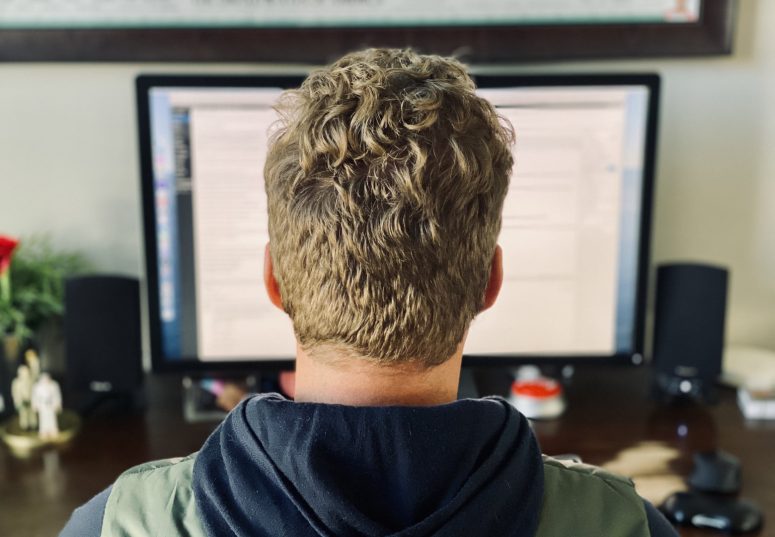 Me at my desk courtesy Lindsey Snow

Since then, these are some of the most frequently asked questions I get from aspiring writers or otherwise curious email inquires:

How do you become a self-employed writer?

My advice: write everyday and ask 50 people if they will publish your best work. If they all say no, ask 50 more and so on. This never fails but most writers will never do this and therefore go unpublished and unpaid. Usually I don’t even have to ask 50, but in two exceptional cases, I asked over 100 before someone said yes: My first story for Wired Magazine about college footballcomputers and my first travel column for Paste Magazine. Both were huge wins for my career and would have never happened had I quite after asking just 50. The harder you work, the luckier you get. (See also: How to succeed: Don’t quit until everyone in the room tells you “no”)

Is it actually possible to make a decent income at home and support a family by being self employed writer?

Yes. I’ve worked from home for the last 15 years, make a good income, and have six mouths to feed (wife and five children). In my experience, successful self employment requires persistence, low overhead (i.e. low maintenance lifestyle), extra emergency savings, and a willingness to sell your craft in addition to the craft itself. Self employment isn’t for everyone, but it can be done and is remarkably rewarding.

What are common traps for aspiring writers?

Not spending enough time asking people if you can write for them. With few notable exceptions (e.g. genius writers such as Laura Hillenbrand and Bill Bryson), most writers and freelance journalist must incessantly sell themselves or be doomed to a life of obscurity. Sad but true.

Does it mean I’m a bad writer if I can’t understand poems?

Not at all. It just means you interpret things differently as a reader. In other words, not all readers comprehend all writers. But the best writers are usually comprehended by a wider audience of readers.

Why would you agree to become a ghost writer without receiving any credit or bylines?

Simple: I value money and time over notoriety. I’ve sometimes ghost write for executives. To do this, I pick their brains, ask for personal examples, then weave a narrative based on what their noggin gave me. In exchange for doing this, I get paid money, which helps me cover my own wants and needs. In return, the executive gets their story published which might resonate with someone in a way my own experience and worldview wouldn’t have.

Is a career in writing a good choice?

Only if you’re tenacious. For me, the answer after 15 years has been a resounding “yes!” That said, to be successful, you’ll need to spend upwards of 10-20% of your time asking people if you can write for them and upwards of 80% of your time during “famines.” (See a theme here?) You’ll also need thick skin, as I’ve been rejected or ignored thousands of times and only accepted in the low hundreds. Oh, and you’ll have to deal with some hate mail but rarely if ever any fan male. If you can handle that and love telling stories, finding truth, or weaving a good yarn, don’t let jaded or unsuccessful writers tell you otherwise.

Busy but fun. This world moves really fast and often times you’re too busy working on your next story to enjoy the limelight of a previously published story. I did this full-time for the first three years of my writing career, focusing mainly on business, technology, entertainment, and video games features. Since the Great Recession, however, I now only contribute to news media maybe 10% of the time. The other 90% is spent writing, consulting, and producing explanatory journalism as an embedded journalist for Fortune 500 companies (aka “content marketing”).

It saved my writing career! (See also: The Great Recession). It’s also the most lucrative writing I’ve ever done, even though I mostly write for limited audiences now as opposed to the millions of mainstream readers I used to reach. What’s more, I still get to pursue interesting topics, interview people who are much smarter than me, tell two sides to the story, and still feel like I’m making a difference. I may not have the influence I once did, but I still get to tell stories for a living and positively influence people, which is what I enjoy doing most.

Surreal. Although I only cover travel part-time as my schedule permits, it’s the worst paying writing job I’ve ever had (i.e. you can’t support a family on these meager rates). But it’s easily the best-paying writing job per story when you factor in the perks and all-expense paid adventure to six continents, dozens of countries, and an untold number of locations over the last four years.

I’m still pinching myself and counting my lucky stars, although I’ve worked really hard to hone my voice and place my stories with respectable publishers.

It was really scary. My first book took 10 years to complete after several years of writer’s block. On top of that, book readership has declined by more than 50% over the last 10 years, making it a harder, if not bad business.

That said, my book became a best-seller for a brief period last year, has touched a lot of lives, and does well enough to bring home some encouraging (although keep you day job) royalty checks.

Nevertheless, I’ve already started writing my second book and am even planning a third—I enjoyed the experience so much.