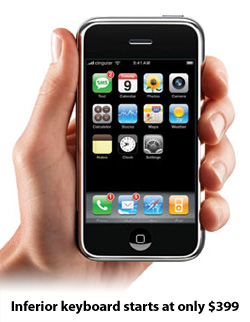 I consider myself a thrifty individual. I don’t shop at garage sales or anything, and have been known to purchase select high-end products, but I love getting a deal. And I hate feeling buyer’s remorse after spending money on something I don’t need or know I won’t use.

So here are five preventative measures I follow to avoid buyer’s remorse:

2. Treat online-user reviews as near-gospel. The best way to make an informed purchase is by doing your homework, specifically using online consumer reviews of services, products, and even offline goods like realtors. The caveat: be sure the reviewed product has a comfortable level of nonoutlier ratings, like my statistics professor once told me. Otherwise you could still feel the sting (note: I prefer over 200 reviews, but will use fewer numbers as a guide if the reviews themselves are thorough).

3. Be mindful of cult products. Cult brands like Apple and Nintendo usually garner a very loyal following because their wares are usually awesome. Usually. No company is perfect (even Apple and Nintendo release mediocre duds sometimes), so tame the release hype from cult brands by getting your grubby mitts on the thing before buying. Even user-reviews can be slightly misleading here due to fanboys, so beware. I recently opted against a jump from my Blackberry to the compelling iPhone after I discovered I wasn’t ready (and may never be) to sacrifice the speed of a tactile qwerty keyboard for an unresponsive and finicky touch-screen keyboard. After all, I use my phone for emails, text, and calls above all other mobile luxuries.

4. Buy like a ninja assassin. If you want to become a ninja buyer of geek goods, listen up! Ninja assassins know there’s always a comparable deal — really, there is no such thing as the deal of a century, even the year. Ninja assassins don’t let friends and family spend their money, meaning push you into buyer something they like for you as opposed to something you like for yourself. Ninja assassins check their balance before making a purchase, both literally and figuratively. And ninja assassins always rationalize the purchase of expensive items they splurge on (like a flight or vacation upgrade), especially when purchased within their means and shared with ninja wifes, ninja husbands, and ninja children.

5. Ebay or Craigslist unwanted, rarely-used goods. Non-collectors only: If you did buy something you now regret, there is hope! List your goods on Ebay or Craiglist for resale to get some money back. I regularly do this, not only as a means to reverse buyer’s remorse, but as a vehicle to recycle my entertainment budget.

One final note: Don’t turn into a miserable cheapskate who counts dollars more than memories when buying products. After all, money is only as valuable as the things it can get you. So save money by deciding against the purchase of trivial things, so you can buy the things that are truly important to you (read: those that you use, really enjoy, and need).

I like it. Number 5 for me is the key. I love to have the latest and greatest, but only if I can create some equity by selling off the old stuff. I bought my first iPod (2nd gen Nano) by downloading all of my CD’s to my computer and then trading the CD’s in at F.Y.E. I got my iPhone by selling my 2nd gen iPod that I wouldn’t be using anymore and ebaying my Blackberry Curve that I had received for free. Every time I buy a new game I always sell the old ones first.

The only caveat I would add to number 5 is to make sure you sell the item while it still holds value. You don’t want to hang onto something for too long and realize that nobody wants it anymore.

As a recovering PR guy, I will vouch for number 2, but with the same caveat you gave. Treat them as gospel, but only if there are a hefty amount of reviews on the product. One or two raving reviews among 8 bad ones or one or two bad ones among 8 good ones is a red flag that the PR department has been there.

Sorry you don’t like the iPhone keyboard. I love it after getting used to trusting the keyboard to correct itself for me. You might not like the keyboard, but EVERYTHING else about it is better than a BlackBerry.

Take your old games to GameStop for trade-in credit.

[…] of the Day: Smooth Harold – A Geek’s Guide to Avoiding Buyer’s Remorse No Comments so far Leave a comment […]