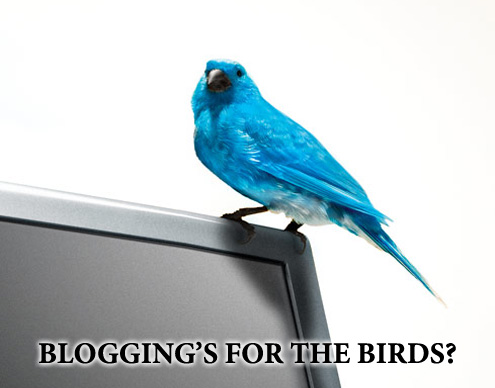 If millions of lifeless blogs and apologetic “sorry for not updating” posts were any indication, blogging isn’t for everyone. And if you’re hoping to make a national name for yourself as an amateur wordsmith, you’re about 3-4 years late to the party.

For everyone else (people with opinions, writers, pundits, and social networkers) regular blogging is still a worthwhile pursuit, provided you have something original to say. It can be used as a platform to start a career in writing, it can influence others, and for some, even subsidize a mortgage or provide a modest living.

I find it comical (not to mention anti-competitive) then when a blogger from the popular Silicon Vally gossip rag encourages lone stars to throw in the towel on blogging. Dumb. That’s like a used car salesman saying there’s no money in automobiles. While I admit blogging is over-saturated, it’s in no way a dead end. And it’s certainly more pervasive than Facebook, Twitter, and Flickr.