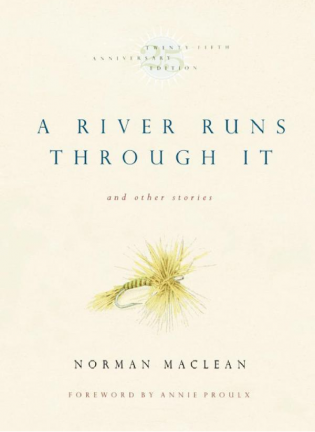 I finished reading A River Runs Through It last week. The prose — written by Norman Maclean in his ’70s — is so powerful and poetic, it halted me on several occasions. The ending made me cry.

Among other things, Maclean dishes advice on faking it until you make it: “Many of us probably would be better fishermen if we did not spend so much time watching and waiting for the world to be perfect,” he writes. Or as his brother Paul often said, “Gentleman, you can’t catch fish with flies in the air.”

Maclean also takes aim at modernization: “What a beautiful world it was once… You could leave beer to cool in the river, and it would be so cold when you got back it wouldn’t foam much. It would be a beer made in the next town if the town were ten thousand or over. So it was either Kessler Beer made in Helena or Highlander Beer made in Missoula… What a wonderful world it was once when all the beer was not made in Milwaukee, Minneapolis or St. Louis.” (NOTE: You can replace the word “beer” with just about anything. Nostalgic.)

But my favorite passage was this:

“We sat on the bank and the river went by. As always, it was making sounds to itself, and now it made sounds to us. It would be hard to find three men sitting side by side who knew better what a river was saying. On the Big Blackfoot River above the mouth of Belmont Creek the banks are fringed by large Ponderosa pines. In the slanting sun of late afternoon the shadows of great branches reached from across the river, and the trees took the river in their arms. The shadows continued up the bank, until they included us.

“A river, though, has so many things to say that it is hard to know what it says to each of us. As we were packing our tackle and fish in the car, Paul repeated, “Just give me three more years.” At the time, I was surprised by the repetition, but later I realized that the river somewhere, sometime, must have told me, too, that he would receive no such gift. For, when the police sergeant early next May wakened me before daybreak, I rose and asked no questions. Together we drove across the Continental Divide and down the length of the Big Blackfoot River over forest floors yellow and sometimes white with glacier lilies to tell my father and mother that my brother had been beaten to death by the butt of a revolver and his body dumped in an alley.

“My mother turned and went to her bedroom where, in a house full of men and rods and rifles, she had faced most of her great problems alone. She was never to ask me a question about the man she loved most and understood least. Perhaps she knew enough to know that for her it was enough to have loved him.”

Heavy stuff. I am haunted by this book.