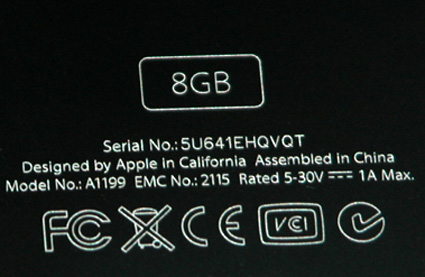 If you haven’t noticed, Apple prints “Designed by Apple in California” on the back every iPod and iPhone it sells, sometimes in a ridiculously tiny font size. Joel on Software tells why:

“These five words evoke a flurry of happy memories… Apple in California is, of course, on the literal level, a computer company, and not a very nice one, but put those words together and you think of apple orchards, and the Beatles, and you think of how Forrest Gump got rich off of Apple stock. And ‘designed in California…’ It’s not made. It’s designed. In California. Like a surfboard. Or a Lockheed XP-80.”

In short, California stands out by being the hippiest of all United States. And unlike its competitors, who outsource both product design and manufacturing overseas, Apple keeps its design rightfully in-house — at all times and at all costs.

The reason? Apple CEO Steve Jobs “argues that the cost-savings [of outsourcing design] aren’t worth what you give up in terms of teamwork, communication, and the ability to get groups of people working together to bring a new idea to life,” as reported by Business Week.

But while the marketer in me adores the “trademark” and its recipe for success, the patriot in me misses a time when “Made in America” still meant something — when it proudly represented quality craftsmanship. And I’m not talking about manufacturing — I’m all in favor of outsourcing assembly to China when it makes sense. But I wish Apple could have printed “Designed by Apple in America” to equal effect.

Sadly, the incompetent executive branch of our federal government has soured all meaning behind the word “America,” even non-political symbolism. Individual states can still retain their individual appeal, as in this case of Apple’s tagline, but the same cannot be said of the entire republic.

I’m just waiting for the day when it says:

“Designed by Apple in California. This product not available for sale to California residents.”

Designed by Apple in California. Made in a sweatshop in China.