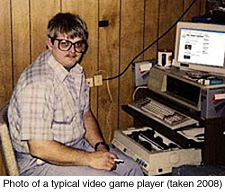 I like video games and write about them for a living, hence I’m a loser.

Or so said conservative commentator Glenn Beck on Monday talk radio when speaking of recent Grand Theft Auto IV controversies. “If you play video games, and you blog about video games, you’re a loser,” he quipped.

For the record, I am also a practicing Mormon.

[Thanks for the tip, Josh]

That’s hilarious. I want to know if he’s ever played the Wii. Guaranteed he would change his tune and start talking about video games on his show. Silly Mormons.

And if you go watch movies every other day and write it on a blog a write critics in a journal you ain’t a looser? Whatever, there will allways be a lot of clowns like that who point at all kinds of “loosers” just to be interesting. I recall a great film with called Burning Mississippi with Gene Hackman and Willem Dafoe where a racist hillbilly “justifies” his hatred saying “If you ain’t better than a nigger, who are you better than?”.

Beck told the crowd at his American Revival meeting in Salt Lake City that he’d been diagnosed with macular dystrophy.