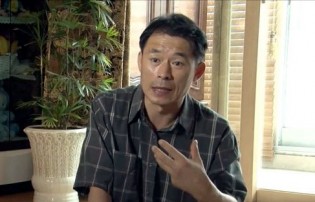 For example: After the screening, an expert panel of three pleasant fellows including the filmmaker fielded questions from about 80-100 attendees. The second “question” came from an assumed student that liked to hear himself talk. He talked about how the movie “moved” him. In between lengthy pontifications, he said, “I guess my question is” three times. He talked a lot. He was the opposite of concise.

As if the man hadn’t undermined his credibility enough and despite answering his own question leading up to his asking it, he bailed with, “Why should people care about this film?”

What a student, if not robotic teacher-like thing to do. The movie spoke for itself. Dude knew it. The entire audience knew it. Which is why once he realized during his eye-rolling discourse he had no question at all, he asked a thoughtless, catch-all one.

A few more examples. Another student said she had two questions. She asked a loaded one and then went into a tirade about sanctions or something. I stopped listening to her babble when it was apparent she wasn’t asking a question, something she admitted to after failing to make her unsolicited point. Several other audience members made politically correct points, asked more loaded or non-questions, and used lots of big words — a popular one was “rhetoric,” what a coincidence! It’s as if some of them were trying to participate in Korean unification themselves, without being asked.

Conversely, the well spoken Mr. Lee, the central figure and hero of the film, ended up sounding like the smartest guy in the room. He used short sentences, active voice, and accessible language, this despite being raised in the depressing and uninformed conditions of North Korea.

Unfortunately, intelligent local life was not on full display this night. Pompous language made sure of that.

The experience reminded me of this classic movie exchange. Or the time George from Seinfeld invents the mythical “Johnson Rod” to make fun of obscure language and mechanical fraud. Or the time I tried to convince my academic father that academic writing could reach, influence, and engage a lot more people if it were written in a straightforward, emotional, story-driven, and entertaining voice. Or the time that clergy only preached in Latin.

Don’t misunderstand me: Not everyone during the discussion talked this way, and a lot of good things were said. Furthermore, academics and even naive students make significant contributions and have many talents, my father very much included.

But their collective English isn’t one of them—it’s obnoxious and cryptic. The world would be a better place without it. Comprende?