Sure, Saddam was a douche, and Iraq will likely be better off in the long run (provided its citizens, not the U.S. government, make it happen), but is it my country’s job to ostracize every tyrant in the world, of which there are many? I don’t think so, especially on my tax-paying dime (I’m a hansom capitalist, mind you).

In a 2003 White House radio address to the American people, President Bush said the reasons for the invasion were “to disarm Iraq of weapons of mass destruction, to end Saddam Hussein’s support for terrorism, and to free the Iraqi people.” I think it’s now obvious that those are probably the three most insincere justifications of all time for America going to war (and I believe war is justified as a last resort). For shame.

According to the Center for Public Integrity, President Bush’s administration made a total of 935 false statements between 2001 and 2003 about Iraq’s alleged threat to the United States. I have no idea who the CPI is, but given what I’ve witnessed, have seen on a handful of PBS Frontline documentaries, and have researched online (never watching CNN and Fox News mind you), I believe at least half of that disturbing number to be true.

Speaking of commercialized television media like CNN, Fox, CBS, and others, it’s just as embarrassing how biased they’ve covered the war, often times reporting the news at face value. Remember that famous April 2003 toppling of a Saddam Hussein statue in Baghdad shortly after the invasion? It seems military officials staged the act. 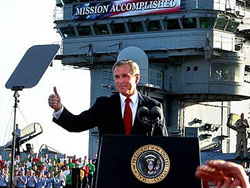 Said staff sergeant Brian Plesich of the incident: “The Marine Corps colonel in the area saw the Saddam statue as a target of opportunity and decided that the statue must come down. Since we were right there, we chimed in with some loudspeaker support to let the Iraqis know what it was we were attempting to do… Somehow along the way, somebody had gotten the idea to put a bunch of Iraqi kids onto the wrecker that was to pull the statue down. While the wrecker was pulling the statue down, there were Iraqi children crawling all over it.”

And U.S. television media said the toppling was by Iraqi initiative. Oops.

But all isn’t lost, and I don’t think the U.S.’s reputation is beyond repair. But it seems the only way to fix the mistake is to offer a public apology, pull out our troops, suffer the consequences, and extend at-large support to Iraqi officials willing to fight for their country’s future on their own behalf. The American Revolution wouldn’t have been much if someone else fought it for us, now would it?

DISCLOSURE: I voted for Bush in 2004 because I admired his leadership in 2001-2002, when America was frightened and hurting. I now regret that decision after his administration mislead the country to war with Iraq instead of beheading the cavemen responsible in Afghanistan, used fear to draft an unconstitutional Patriot Act that infringes on my privacy, created the pointless TSA which makes me remove my shoes in an airport, implemented the No Child Left Behind Act that stupefies our children, spent more money than any other president in U.S. history (liberal, conservative, or otherwise), left disenfranchised Americans to drown in a major U.S. city for an entire week in 2005, and held that ridiculous “Mission Accomplished” charade in 2003. I would do a triple cartwheel if Ron Paul had a chance of being elected President, but will write-him-in just the same come November.

Some really interesting points Blake. I agree about allowing the Iraqi citizens a chance to produce the country they want. I too cringe at the amount of debt we accumulated during this war and I feel
that most presidents do a terrible job their second term (what’s the point? They can’t be reelected so why listen to voters?)

It is funny to me that you have been using the word doche as an adjective.

I’m with you with Ron Paul

Excellent post. Well thought out and supported. Its hard to remember back to that time at the beginning of the Bush push to go into Iraq. I think a lot of people have forgotten. I to voted for Bush in 04 but mainly because I wanted to see the Supreme Court go conservative. I have since repented for my sin. I’m serious.

Couldn’t agree more Blake and the sad part is that the American public is too lazy/lame/prideful/greedy to do anything about the problems our nation is facing. We rely on a faulty two party system that basically provides us with candidates so similar to each other that change is difficult if not impossible. While someone like Ron Paul/Bob Barr who are different enough to make a difference are unelectable.

That being said I still believe America is resilient enough to overcome the problems we face today. It just won’t happen as quickly as it could if people would educate themselves, organize and demand change and accountability from our “leaders.”

Wait, you mean to tell me that Bush lied to us? GTFO!