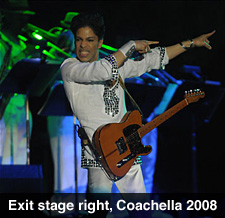 I had the opportunity to mix business with pleasure and attend Coachella in Palm Springs over the weekend. Here are my fragmented thoughts:

Note: Attendee mileage may vary. I didn’t stay for Prince’s two hour set. It was impossible to catch all of my favorite acts and/or notable bands due to time constraints. I didn’t see any Sunday performances (sadly missing Justice as a result). I don’t experiment with fleeting recreational drugs of any kind.

Bad luck – you seem to have caught a lot of the worst performances. I agree 100% with you about Fatboy, Kraftwerk, MGMT and Portishead (whose music was beautiful in its way but horribly wrong for a festival). Prince seemed to have made no effort to tailor his glitzy sanitized Vegas show for a more indie audience. Jack Johnson will always be dull, but was a nice relaxation if you had seen some decent dance acts in Sahara, which as far as I was concerned was the best place to be for much of the 3 days (especially Sunday which we thought was the best day. Holy crap – I refuse to use asterisks – and Does it offend you, yeah? were pretty good in the Gobi on Sunday, and the whole session from Modeselektor, through Simian Mobile Disco and Chromeo – who by the way did the set that Prince should have done – short, funky and punchy – to Justice, had stoned and clearheaded alike jumping up and down. Did you see Hot Chip, Pendulum or Aphex Twin in there? or Flogging Molly in the outdoor theatre? What about Bonde do Role – really high energy Brazilian hiphop. The only bands we thought really did it on the main stage were the Raconteurs and of course the awesome Gogol Bordello,although we heard good things about Cafe Tacuba. Sharon Jones did a passable impression of a female James Brown.
BTW if you don’t experiment with fleeting recreational drugs, what do you do – long-lasting ones? We met a girl who was saying that K made her feel existential – an existential doped horse was a new one on me.

My wife will be happy to hear that Jack Johnson moderately entertaining. She has wanted to see him in concert for a couple years now…

I definitely would have liked to see Death Cab. I’ve been listening to their Plans album off and on for the past few weeks, and can’t seem to get enough.

On a side note – I recently loaded two Spoon albums on my iPod from Robert’s computer. Wow. Thems is good. Real good. Thanks for the tip…

You need to never go to Coachella ever again. Keep listening to jack johnson, fag.