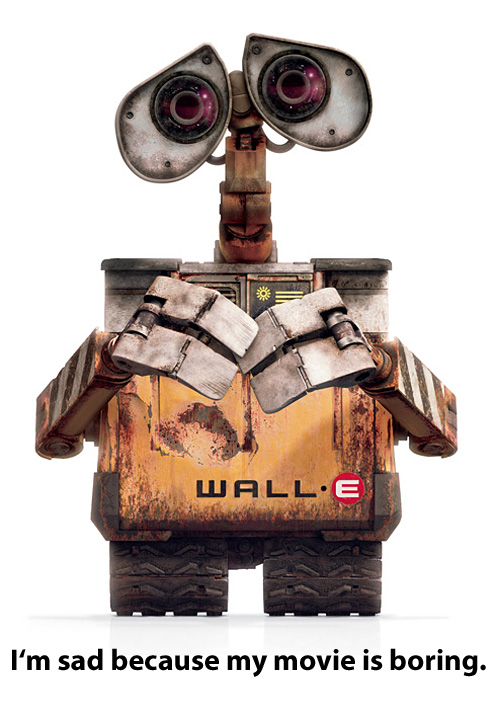 Pixar’s Wall-E and Stanly Kubrick’s 2001: A Space Odyssey share a lot in common. Both are set in space, feature little dialog, have robots taking over the world, are immensely artistic, won’t keep a 2 and &frac12; year-old engaged despite their G rating, and offer a handful of sophisticated moments in filmmaking. But both are really monotonous — an analogy proving that Wall-E is easily Pixar’s worst film to date, for both adults and children alike.

I remained in the theater on Saturday only to see the ending, but the journey getting there is tedious and slow. There are some comical moments, particularly between starring robot Wall-E and his love interest, but the the movie’s underlying commentary on environmental issues is clumsy, pretentious, and undercooked at best. There’s just no story here to keep things interesting; no characters that you will really sympathize with.

I think even Pixar agrees with me. In a 2007 teaser trailer, director Andrew Stanton admitted that a handful of other Pixar films were made before Wall-E, which was prototyped in the summer of 1994 along with “a bunch of ideas” that became A Bug Life’s, Monster’s Inc, and Finding Nemo. If it took 14 years to produce Wall-E while better movies were being made, maybe it should have been skipped. So is Pixar short on compelling ideas?

In any case, skip this movie. Otherwise you’ll pray for 1:36 minutes of your life back.

OK it wasn’t that bad! I agree with you – it is long (for a kids flick) and some parts are slow and boring. My four year old wanted to go home, my wife really wanted to go home, and my daughters (ages 7 and 10) loved it. I liked it but then again I like movies like Wall E so maybe I’m boring. Well I already knew that!

That’s too bad, I was really looking forward to seeing it. I guess it’s one to wait for at red-box.

I disagree completely. Both my 4 year old and 1 1/2 year old sat great during the movie. I think the fact they made the first 30 minutes with 0 dialogue keep you interested was amazing at least for me. The artistic direction in it was superb. It actually runs shorter than a lot of the other Pixar films too. While it wasn’t my favorite of their films (Ratatouille and Bug’s Life), it was well worth watching.

I agree with you Blake. I heard a few giggles (aka less than 10 kids) during one point in a theater full of children and I didn’t even crack a smile (although I did sigh a few times). I wasn’t per say bored, but I was literally annoyed throughout the whole thing. When did Disney turn into an Al Gore pet-project?

Blake, are you sure you didn’t accidentally see Wanted, the sub-par action movie starring Angelina Jolie, instead? It also opened last Friday, and your review, while well-written, seems to be about a movie that 96% of critics, and millions of satisfied consumers across the US did not see. Perhaps it was the director’s cut, or an early Wall-E bootleg that your theater mistakenly placed into the projector?

Anyway, as to your last point… Stanton did say a hold was put on Wall-E, but not because there were better ideas in the can. It was, in fact, because Pixar knew audiences (and more importantly, its own storytelling chops and tech) were not ready for such a flick. Apparently some people still aren’t, and I think anyone who sees conspiracy theories, or Al Gore, or feels like this movie is threatening in any way probably has a few issues of their own–much deeper than this movie, in fact–to work out.

The truth is, many of the doomsday scenarios portrayed as 700 years in the future by Wall-E are already happening (or have already happened). Obesity epidemic? Check. Pollution? Check. Waste and garbage piling up? Check. Space trash? Do a Google search. Lack of communication between family members due to technology? Check. But why bother accepting that when you can just blame some lefty environmentalist, right?

I’d also argue that ANY movie, short of a 30-minute string of flashing lights and loud noises, would have a hard time keeping the attention of a 2.5-year-old. Perhaps this unfair control group was the real reason for your disdain for the movie, which by and large (pun intended) is one of the best movies to come out of an American studio in the past 5 years, if not more. I recommend seeing this movie again, with older children, or a fresh set of eyes, if possible. Otherwise, color me positively baffled this morning.

This movie was also pretty short. Commenter above, please invest in a wristwatch.

It was Wall-E, confirmed. Ratatouille, finding nemo, and others Pixar flicks are more technically innovative than Wall-E, I believe, so I disagree with your reasoning.

Regarding your second point, can I still be an environmentalist even if I call Wall-E’s commentary on the subject clumsy?

My 2.5 year old has sat through numerous Pixar movies, including Nemo, Rata, and Toy Story on too many occasions to count.

I agree with Jack; WALL-E is one of the best American movies I’ve seen lately.

Just because your 2.5 year old kid didn’t like it, it doesn’t mean is is boring.

I think this debate about whether Wall-e is boring or not is really a proxy for a debate between people who like well thought out movies vs movies where things blow up. I like personally liked this movie very much despite enjoying my explosions, the latest movie to set the bar is the Bourne Ultimatum.

WALL-E is the best animation of all time, not just me thinks that. it is currently the best ranked animated movie of all time on http://www.imdb.com, which is an actual movie review website. it has great characters, a great storyline, a great message, and even more great things than i can list here, and if you saw no potential in this movie, then you are an impatient, self-minded, one-sided, boorish pig.

all that this “not-so-smooth harold” did was go to the theater, stuff himself on popcorn and think about his paycheck for 1:36 minutes, all while totally ignoring a masterpiece. then he rushed out and wrote a single-minded ignorant review that was badly thought out, went 100% against the grain, and was 50% bullcrap, and rushed it because he had a deadline and needed to suck on a cigarette.

PS hey harold, of course it’ll be boring if you sleep through the whole thing!

Everyone is definitely entitled to their own opinion, but I think the overall response to WALL-E has been positive.

I personally loved it! I would compare it to a modern day Fantasia as heavy attention was paid to the artanimation and music. A true masterpiece.

Wall-E is boring if you are stupid.

I consider myself perfectly intelligent and have watched a number of childrens and adult from around the world, which are far more in depth than wall e and i completely agree with blake, so i find that last comment prentous and insulting. It’s totally over rated and a total bore in my oppinion. It has nothing to do with the amount of action of flashing lights, i’ve watched similiar movies which were much better…..to be honest walle e was obvious and dry.

ok, I’m eighteen years old and knew about WALL-E but never saw it back in 2008 and heard that it was great and boring and I saw it advertised going to be on during the week where I’m from so I sat down and watched it. AT first I thought it was going to be boring but there was just something interesting about it that made me keep watching and I really enjoyed watching it. It really sweet to see WALL-E and EVE together 🙂

I love this kind of comments. If no one that saw no potential in this movie is dumb then following your logic everyone that got it must be smart. You’re IQ is then equivelent to my 10 year old cousin. Congratulations.

The more “intellectual” a movie pretends to be, the more pretentious arrogant assholes it gathers.
For kids and teens I believe there’s an important message to be passed.
But the thought that this movie could ever enlighten any grown man gives me the shivers.