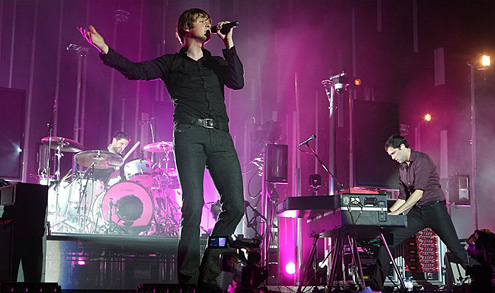 Lindsey and I are going to see Keane for the second time in Salt Lake tonight. In preparation, I can’t think of a more fitting time to name my top 10 Keane songs of all time, so here goes.

10. Fly To Me. A b-side to “Everybody’s Changing,” this song is perhaps the most uplifting Keane track out there. The organ and bass provide the back bone, while Tom’s vocals soar. I’m surprised it never made one of their studio albums, it’s so awesome.

09. Perfect Symmetry. This jam sounds a lot like early Keane songs. It’s driving. The piano is aggressive and all over the place. But the vocal break down at three minutes in really makes it stand out… Before Tim and Richard drop it like it’s hot.

08. Try Again. I love this track. It’s like a lullaby with a heavy dose of inspiration. Tim’s Roads-like piano are as soft as Tom’s vocals. And it just carries so well.

07. Bend And Break. The first time Lindsey and I saw Keane in 2005, they opened with this song. I feel funny saying it, since this is a piano band we’re talking about, but the band blew the roof off the concert hall with this one. Easily the most energetic Keane song there is.

06. The Lovers Are Losing. As the linked-to video shows, Tom runs like a girl. Good thing he sings for a living. It’s not the most original Keane track, but it’s fist-pumping worthy and highlights the band’s unique sound.

05. Snowed Under. I don’t think there’s another active band with better b-sides than Keane. I can think of almost a half dozen that could pass as singles, let alone be included on a studio album. And Snowed Under is the best of the best.

04. A Bad Dream. If you don’t sing out loud during this song, you have no soul. If there’s one Keane song that makes me want to sing loudly, even in the presence of others, it’s this one. Awesome track.

03. Somewhere Only We Know. The one that started it all is still tops. Melodic piano. Thumping bass. Pounding drums. And Tom’s angelic vocals. Just a lovely, lovely song.

02. Everybody’s Changing. In addition to driving instrumentals, this track has the best Keane lyrics ever written. “I’m trying to make a move just to stay in the game. I try to stay awake and remember my name. But everybody’s changing, and I don’t feel the same.” How often have I felt like that!

01. Nothing In My Way. If this groove sounds like a splashing, in-your face rap track, it’s no coincidence. Song writer and pianist Tim Rice-Oxley said he wrote it to sound like Emenem’s “Lose Yourself.” Mission accomplished. He did it. It’s done. The greatest, most-rocking Keane song ever written.

We’re seeing Keane for the third time on September 11th!

i tink in thin air (its fantastic)

She said she has no time…………the best!

great but coldplay has better b sides

On a day like 2day,,bedshaped,,we myt as well be strangerz,,,love is the end,,why do people 4get ese love songz,,

I think “the way you want it” is their best song, it’s so simple, but damn it’s beutiful…

You forgot My Shadow

What about ‘Hamburg Song’?

“Somewhere only we know” is my best ever….always gettin’ elevated ,everytime i listen 2 that song, and nostalgia just engulfs my head…why is everyone not mentioning “can’t stop for a minute”? Thats a masterpiece as well

I feel the “best of the best” of keane song is “Everybody Changing” cause it’s so very sad and meaningful 4 me.. Keane is the best!!

sunshine is great too!

Nothing in my way <3

For me, i choose “A Bad Dream” as the first one then followed by “Somewhere Only We Know”, “Atlantic” & “Sunshine”.

Recently, i am just fallin’ in love with “Silenced By The Night”.. 🙂

What about Bedshaped? That was the first song I heard from them, and that’s how I fell in love with the band. Still my favorite. 🙂
After Bedshaped, though, I would say 2. A Bad Dream 3. Somewhere Only We Know 4.Nothing in My Way 5. Everybody’s Changing