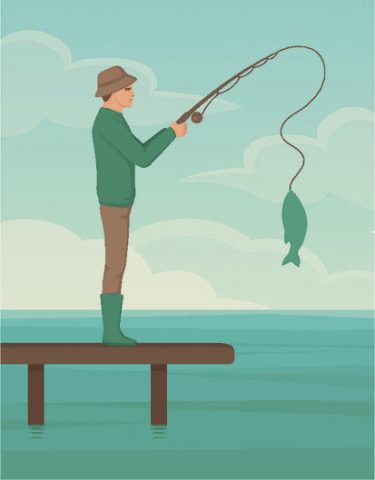 On a recent fishing trip with friends, in which we purposely neglected to pack in food, in order to make our catch really count, I went empty-handed after two full days of fishing. Thanks to my more-skilled-than-me buddies, who generously shared, I didn’t go hungry, however.

After serious bouts of self-doubt and nearly giving up on the third day, though, I decided I wasn’t going to quit until I caught at least one keeper. After empowering myself with that mindset, I actually ended up catching five that evening—enough to feed me and my friends, who coincidentally failed to catch one on that final day (really!).

On the return hike home, I thought a lot about dependency, perseverance and the power of determination—in life as much as business. Here’s what that experience taught me.

Your success depends on others. As hard as it sometimes is for the more controlling among us to admit, humans are social creatures and must rely on each other to thrive. This is equally true in business. “To succeed, you need other people to compensate for your personal shortcomings,” says James Song, an entrepreneur and Costco member from New York City.

Your success depends on perseverance. “Perseverance is incredibly important,” says Jeff Skipper, an executive consultant and Costco member from Calgary, Alberta. “Whether you’re well established or a budding brand, sales often go to those who keep showing up.” I’ve yet to meet a single business owner who doesn’t accept this as a universal truth.

Your success depends on determination. Pulling a random number out of the sky and calling it a “goal” probably won’t work. For determination to take root, you must believe that a set goal is possible and within reach. After catching your first “fish,” your confidence will increase, and you can achieve greater growth by increasing your goals accordingly.

Your success depends on timing. Despite our best efforts, droughts are a natural occurrence in life and business. The best way to weather these is by “factoring them into your budget and savings,” says Lauren Consul, a business coach and Costco member from Los Angeles. “Use downturns as an opportunity to invest in learning, study your competition, and improve your skill set.”

Last but not least, your success can obviously benefit others. Arguably one of the greatest feelings in business (and fishing) is being able to give back to those who have previously supported you.

As seen in the April 2019 issue of Costco Connection