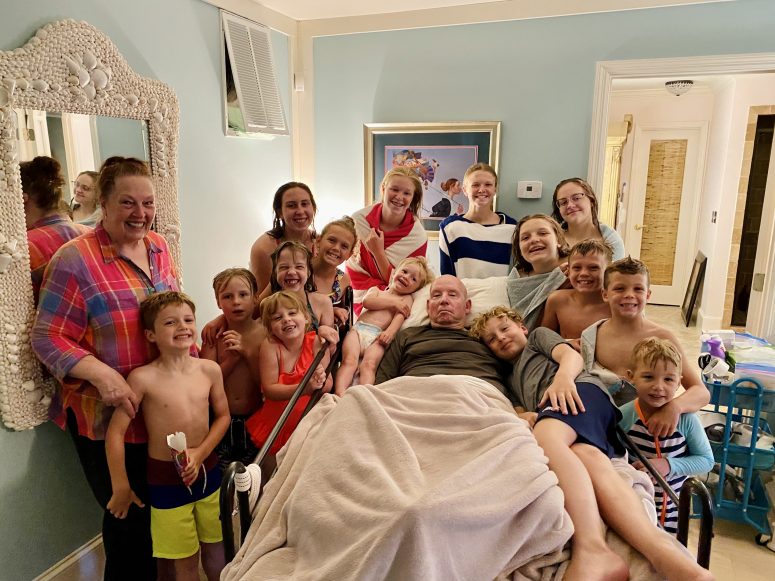 Brent Snow surrounded by his wife and grandkids

My dad is dying.

Two years after a disabling stroke that compounded his dementia, he is largely brain dead now and rapidly deteriorating. I haven’t spoken to him since Christmas. Even then it was like speaking to a toddler.

Bedridden for most of the year, he mumbles gibberish on occasion. But he mostly sleeps while confined to his bed on heavy medication. It’s deeply saddening.

Earlier this summer, my uncle said it best: “Your father was the smartest, most intelligent, and funniest of the three of us,” he said, speaking of the three brothers. “It’s heartbreaking to see him lose that gift before the rest of us.”

As terrible as it sounds, I’ve actively hoped for my father’s death all year. This is no way to live. I don’t fault any of my family members, however, for wanting to keep his warm, breathing body around. I fully trust my mother’s and nearby sibling’s selfless care of him.

We tried hard as a family to help him rally, but it wasn’t meant to be. On top of that, I take great comfort in my conviction that I will see him again, in all his glory, in the afterlife.

Some people think that’s fake news. But there’s no proof either way—which makes this beautiful, mysterious life on Earth all the more magical. Whatever happens, I hope you tell your dad you love him after reading this.

I’ll go first: Dad, I love you. I never got to say it with the knowledge that it would be my last time doing so, but I love you. Thank you for being an extraordinary and devoted father. I miss you.

Blake, I am so sorry to read this. I feel for you and your family. Please take comfort from Jim and I and stay strong as a family! Xx