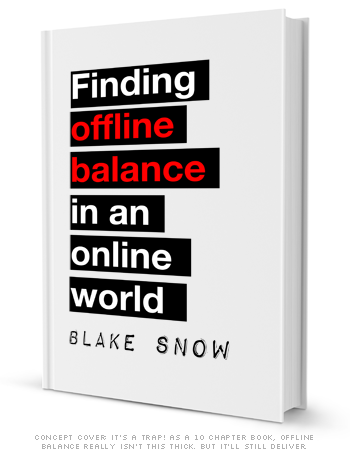 I don’t know the scientific name, but I’m one of the lucky creatures that possesses an insatiable curiosity. As such, I use the Internet not only for work-related and entertainment purposes; I use it to satisfy every conceivable whim I encounter within my immediate environment on any given day.

For example, I often ask myself, “I like this song—I wonder where this band is from?” Or, “What other films has this director made?” Within seconds, Wikipedia has the answer. Last week, I overheard someone mention the country of Chad—a mystical place in west Africa. “Why haven’t I ever heard of this place?” I thought to myself. An hour later—thanks to Google—I was entrenched in all things Chad and was prepared to write an introductory discourse on the republic to attentive undergrads.

But as with all things in life, too much of anything is unhealthy. Except for maybe air guitar, chocolate cake, and dancing. But I digress. The trouble is we’ve reached a point with personal technology that it is so accessible, so immediately gratifying, and so demanding that digital indulgence is no longer just affecting information junkies like me. It’s affecting everyone. If we don’t stop to recalibrate our relationship with these powerful, life-changing, but also life-hindering technologies, in just a few years we’ll go from just skipping meals to widespread burnout, debilitating attention spans, and digital anxiety disorder. We’ll become slaves to the very devices that were meant to liberate us.

That’s the reason I’m writing this book. In addition to highlighting bad behaviors with the wag of my finger, Finding Offline Balance in an Online World will document the personal lessons, clever disciplines, reset tips, and sustainable connectivity strategies I’ve learned and developed over the last 15 years, including the recent years in which I won a Webby Award ® for being the first person on record to achieve online nirvana. (It’s awesome, I tell ya!)

Not only that, but I’ll wax poetic on modern white-collar living, help you rediscover nights and weekends, expel the wonders of low-caloric internetting. I’ll show you how to outperform a work-a-holic while keeping your sanity, how to recharge your battery in ways few have imagined, and why you might consider becoming a Reformed Luddite. In other words, I’ll deliver what the title promises: How to find offline balance in an online world.