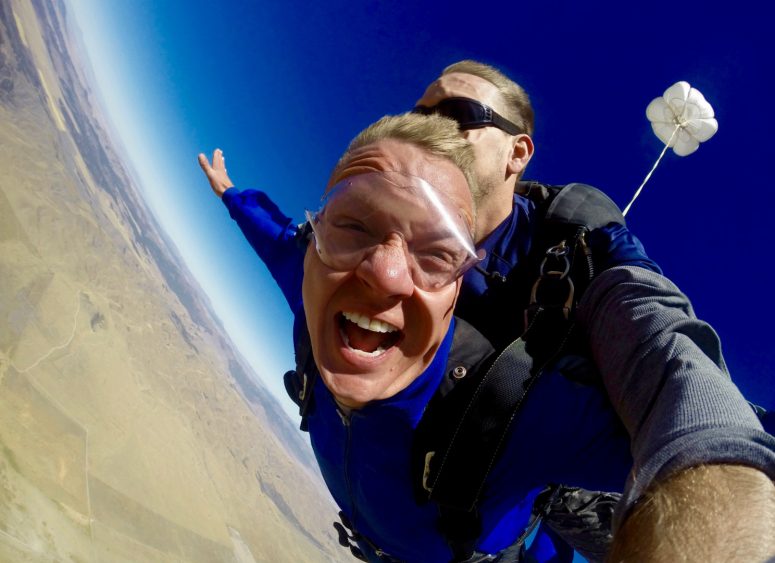 It only took me a few minutes to fall 10,000 feet, but I didn’t really come down for another couple of hours. That’s the best way to describe my first time skydiving. That and recognizing it as one of the greatest physiological sensations I’ve ever endeavored.

On a royal blue morning recently, I drove forty minutes south of my home to Skydive the Wasatch in Nephi, Utah. I was greeted by Andrew the drop manager, Jordan my instructor (or more accurately the person I’d strap my life to), and Joel the pilot.

Free snacks, a row of leather sofas, and caffeinated drinks lined the open hanger in an effort to ease or at least distract the nerves of would-be jumpers. Just outside, an old Cessna plane came to life to take a woman in her forties and her friend in her twenties on their first and second respective dives. While waiting for their quick return, I signed and initialed the longest waiver I’ve ever seen without reading a single line of legalese.

“Are you ready?” Jordan asked with a friendly smile. I honestly answered in the affirmative, and then he explained the safety and protocol procedures. “The whole experience takes about 25 minutes,” he said. “Twenty minutes to climb, around half of minute to free-fall, and three or four more to parachute down.”

While donning my jumpsuit, he also addressed many of the questions I was silently asking. If your parachute doesn’t open, for instance, there are two fail-safes: a reserve parachute and automated deployment in the event the skydiver or instructor is unable to pull the chute. Thanks to rigorous FAA requirements for parachutes, participants, and planes, skydiving is significantly safer than driving a car, he added. (More than 99.999% of the 3 million annual jumps happen without incident, I later learned. The ones that do are largely the result of extreme maneuvers—ones commercial drop zones don’t engage in.)

To help withstand the 120 mile per hour (or 200 feet per second) freefall, Jordan concluded, every chute, reserve, and line is frequently rechecked and repacked. And, yes, depending on your state or country’s contestability period—anywhere from a day to a year or two in most cases—life insurance covers death by skydiving, so long as you didn’t lie about any previous skydiving experience.

By then, it was my turn to jump. “Get in the plane,” Jordan instructed. Minus the size, the insides looked like something I would have expected from the guts of a B-52 bomber. Lots of exposed steel. A swaying hula girl on the small dashboard. Instead of seats, we reclined on a padded floor.

During the circular climb, we small talked. While looking down at the Wasatch mountains that were beginning to signal autumn with red and yellow trees, Jordan said we’d attempt a gainer from the plane—”the best way to jump,” he chirped.

“One minute to drop!” Joel radioed to Andrew. At this point, I expected nerves to overtake me, but they didn’t. The entire premise was too extreme, if not ludicrous, to notice, especially with all the poised people around me who had done this several thousand times before. Then the door slide open. The tandem couple before me shimmied out to the ledge. We exchanged fist bumps. Then they were gone.

Seconds later, I followed their lead. I flubbed the gainer, but was instantly overjoyed with the rush of wind, speed, deafening sound, adrenaline, and the oncoming world of blues, greens, browns, and traces of civilization below. I screamed intensely. I laughed loudly. I smiled for the GoPro. With exception to a failed parachute, nobody was going to break my stride, hold me down, or keep me from sky-high euphoria.

After who knows how many seconds, the chute thankfully opened. I was immediately overcome by relaxation that was just as extreme as the preceding life or death experience. The volume instantly went from 11 to 0. I raised my fist in a show of relief and gratitude to whoever was watching. I smiled some more and caught my breath as we drifted down to earth. 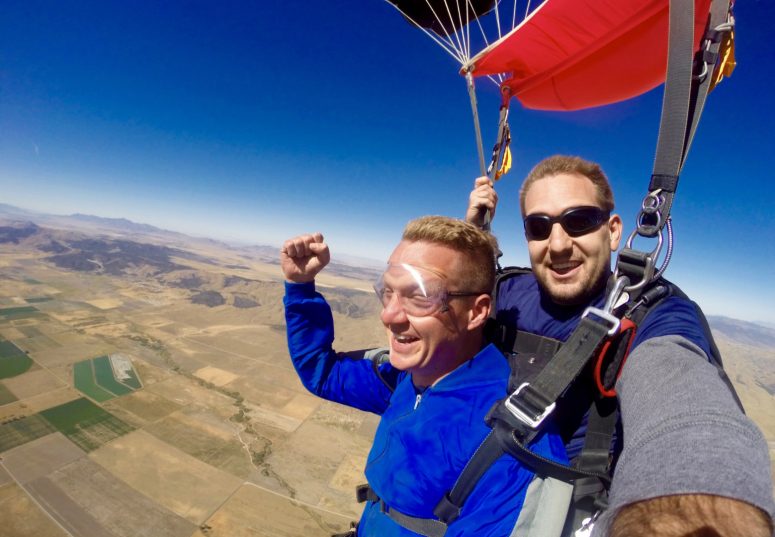 The most remarkable thing about skydiving is its disorienting and forceful sense of violence, peace, death and life. I was so energized by the tremendous drop, afterwards I felt like running a marathon. Upon returning home, my calming wife noticed this and asked if I had snorted coke or taken speed.

Nope. I just jumped from an airplane.

The story first published in 2016 in Paste Magazine