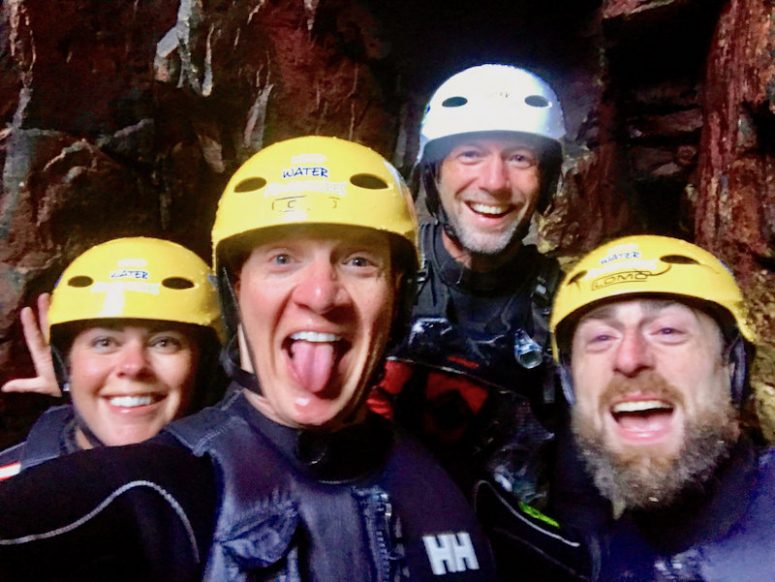 “I don’t think I’m suppose to jump into that.”

This thought came to my mind only moments before my first leap from the edge of a seaside cliff in Ireland. The fall was no more than six feet. But the swelling sea was angry, frothy, and splashing to and fro. Despite my mega-sized life vest, double wetsuit, protective gloves, and helmet, this massive tide pool surrounded by skin-cutting rock on all but one side looked like it would swallow me whole.

“Jump!” my expert guide commanded. Like many of you, I’ve been told to respect the ocean my entire life. Now some self-proclaimed authority was telling me to plunge into the worst of it. All in all, the conditions couldn’t have been any less inviting.

But like all good lemmings, I disregarded my instincts, trusted my equipment, and accepted the advice of my convincing leader. I jumped.

With surprising swiftness, my heavy-duty life jacket quickly carried me to the surface. That wasn’t so bad. As instructed, I carefully swam to the designated return ledge, timing my arrival with the troubling tide to avoid being thrust into a sketchy wall.

Not long after, my wife and I were jumping from 10, 15, and 20 foot cliffs. By the end of the two hour tour, I was happily diving from those heights and ultimatly feet-firsting from 30 feet into an equally ominous but other section of ocean.

On top of that, we had swam into a dangerous looking cave, which our guide assured us was safe at this given time, but extremely hazardous only hours before. In between our jumps and aquatic spelunking, we struggled to swim along the coastline but managed to stay afloat, thanks to our specialized gear. At one point, we even broke into singing and smiles—nevermind the otherwise alarming setting.

By the end of the late afternoon, as the radiant sun was setting on the shores of Kerry, my wife and I both decided that we had just participated in the most rewarding (and favorite) memory from a week in Ireland, of which we explored by car, on foot, by boat, and now by cliff jumping some of its most famous cliffs.

Truth be told, so-called “coasteering” is really just scrambling up cliffs and jumping into the ocean. It sounds more mundane, off-putting, and dangerous than it really is. If it weren’t for the biting sea, rugged coastline, nooks and crannies, and the experienced guides that spend countless hours timing their visits and mapping the most enjoyable and safest courses, the sport wouldn’t exist.

But I’m glad it does. I’m glad that someone from Wales once decided to marry such a simple idea with tourism. I’m thankful the idea slowly took root and spread to other parts of Great Britain and into the timeless coastline of Ireland.

Looking back, I will never forget the afternoon I discovered coasteering with Wild Water Adventures. It’s the greatest water sport you’ve probably never heard of but unconditionally should try the next time you’re in the area. ●

This story first appeared on Orbitz in 2019