Howard Gossage was revered for his copywriting skills

Most people don’t know the difference between copywriting and editorial copy. I write the latter, which is generally understood by plebians as long-form “magazine articles.” The former is short-form and widely used in advertising and marketing to persuade someone to buy a product or influence their beliefs.

In any case, I usually don’t copywrite in a technical sense. I sometimes get asked to but usually decline. Unless, of course, Nike asks me to, which they did last year. Here is that story.

Long-time readers know I have a soft spot for the world’s largest maker of athletic apparel. I grew up with them. I still dream of working with them.

Last year I pitched them on letting me consult and write content for them, which is a fancy way of saying “let me tell interesting stories on your behalf to drive people to your website.” Instead they came back and asked if I would write a few shoe blurbs for them, specifically for Converse, which Nike bought in 2003. My hiring manager knew I specialized in editorial but wanted to see what this old thing could do, given the chance.

The assignment was to overhaul a few product descriptions. May the best copywriter win. (NOTE: I was competing against other hired copywriters. Although we were being paid—unlike most advertising competitions, which are freely done in hopes of landing seven-figure deals—we would still be competing against each other before any work saw sunlight, which was a fun experience for me.)

After channeling my inner Elaine Benes, this is what I wrote for them:

Nike/Converse blurbs written by some guy

Men’s Jack Purcell Leather. I remember the first time I saw a pair of Jack Purcells. Kurt Cobain wore them. “Why is that toecap smiling at me?” I thought. No matter, the sneakers looked good beneath acid washed jeans and frayed hems. Not as iconic as All Stars, but just as timeless, if not more sophisticated. Uncommon but familiar. Ready for pavement as much as unplugged music adorned by flannel. While I no longer idol the Nirvana front-man like I did as a wide-eyed adolescent, his choice of footwear always stayed with me. Invented in the ‘30s, popularized in the ‘70s, and rocked in the ‘90s, the Jack Purcell Leather stays true to any red-blooded renegade today—no grunge required. 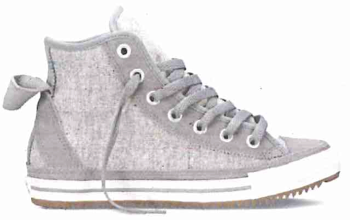 Women’s Elsie All Star. Now here’s a fancy breed. You’ve seen Chuck Taylors before. But not like this. Thanks to a tweed and suede finish, the versatile Elsie goes with a lot. Street garb. Nights out. School corridors. They’re stylish but not flamboyant. Quiet color but bold lines. Your eyes probably won’t notice the aggressive tread—at least at first blush—but your footing will. The Elsie struts. She makes out. She’s as comfortable as she looks. Oh, and she’ll fit your lifestyle. You’re one of a kind, right? So are these, sister. So are these. 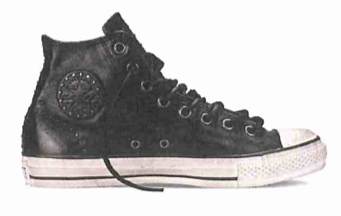 Men’s Chuck Taylor Studded. You call those ratty sneakers rock ‘n roll? These are rock ‘n roll, bro. Look at those studs. LOOK AT ‘EM. How badass is that? It’s like the original sneaker rolled up on a spiked cow farm, asked the owner for premium all-black leather, and never looked back. As you can see, they look better scuffed, though they remain iconoclastic. Of course, the original Chuck Patch is still there. So are the immortal silhouette, tough tread, and vulcanized rubber. But you don’t care about those things. You don’t talk about them. You wear them. You exhibit them. They go with slim slacks and dark denim as much as Stratocasters and Les Pauls.

My work didn’t impress. The edits came back bathed in red and accused me of overly injecting my own voice, sounding like and old man feigning hipness, and using outdated adjectives. All of which are true, of course. But that’s always been my style, intentional or not.

The editor was still willing to work with me, however, but I knowingly bowed out at that point, thanked them for giving me a shot, and moved on to better fitting projects. It was the second time I was rejected by Nike.

Looking back, I still like the work I submitted. But I also realize I’m no Howard Gossage, Leo Burnett, or David Ogilvy. But I’ll never stop trying to be. And I’ll forever apply the most potent copywriting skills to whatever it is I’m writing, namely bold headlines, punchy sentences, disciplined cleverness, lively language, and believable ideas.

Hahaha. Did you tell them of your Nike design submission? At age 10?
Flashy writing. Sounds like that J Peterman catalog stuff.